The City of Kenosha was on fire. Democrats Joe Biden and Wisconsin Governor Tony Evers were focused on politics, not public safety during the violent riots that destroyed much of downtown Kenosha, WI.

B & L Office Furniture, a small business on 60th Street in downtown Kenosha, was burned to the ground in the early morning hours of August 25.  Scott Carpenter, whose family has owned and operated the furniture store for over 40-years, was disheartened to see his family’s business in ashes. Weeks later Carpenter had a message for his fellow citizens:

“I’m not much for politics, but Joe Biden is so weak he’ll never stand up for folks like us.”

Sadly, Democrats have not stood-up for law abiding citizens. In fact, they have compounded the destruction by playing politics with the lives and livelihoods of Kenosha residents. Instead of working with President Trump to denounce and end the violence, they stalled and equivocated.

As The Washington Times explains in a hard hitting report:

Only after three nights of chaos and, tragically, two deaths, Mr. Evers accepted help from the White House. Thankfully, things have calmed down in Kenosha since then as the rioters realize local law enforcement now has the support they need to keep the community safe…

…Mr. Biden’s original statement about Kenosha jumped to the conclusion that the police were automatically at fault. He raised the issue of “excessive force” and said, “the officers must be held accountable” without ever requesting that people avoid violence seen in other cities across America.

Even though an independent investigation by the Wisconsin Department of Justice was underway, other Democrats made similar statements. Late last week, the Kenosha News — a local newspaper that historically endorses Democrats — attacked the current governor saying, “Evers’ statement on Sunday fueled the fire before any rioters got here. His insufficient response has put a Wisconsin city and its residents in danger. Now he needs to do everything the state can to help Kenosha and protect its citizens.” While it was reasonable to be disturbed by the original video, it is also appropriate to wait for the independent investigation results to pass judgment on the police.

Meanwhile, President Trump visited Kenosha, WI to offer help and solutions while also criticizing Democrats like Joe Biden for encouraging the violence. Included in President Trump’s aid package is $1 million to Kenosha law enforcement, $4 million for small businesses and $42 million for statewide public safety in Wisconsin.  After the visit, Scott Carpenter shared his thoughts on President Trump with Kenosha News:

He’s there to help. He wants to help. I don’t understand why the (Democratic) party let us suffer like we did. He gets it. He understands. He wants to help and knows this isn’t right. His hands are tied when people don’t reach out to get the help that he got there.

When far-left Democrats are in control they focus on protecting their progressive political narrative, not public safety. And the citizens of Wisconsin are taking notice. President Trump wants to Make America Safe Again – why doesn’t Joe Biden? 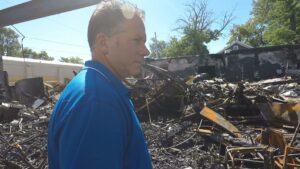