President Trump has spent his first four years in office keeping and fulfilling the promises he made to Americans on the campaign trail back in 2016. Last night, President Trump fulfilled yet another promise and appointed a third Constitutionalist to the Supreme Court.

PRESIDENT TRUMP IS CEMENTING HIS LEGACY OF JUDICIAL APPOINTMENTS WHO WILL UPHOLD THE U.S. CONSTITUTION AND RULE OF LAW AS WRITTEN

The Facts: President Trump Has Kept His Promise To Appoint Conservative Judges

During His 2016 Campaign, Then-Presidential Candidate Donald J. Trump Promised Americans That He Would Appoint Conservative Judges Who Would Uphold The Principles Of The U.S. Constitution. “Donald J. Trump, the presumptive Republican presidential nominee, released a list of potential Supreme Court nominees on Wednesday as part of an effort to quell concerns that he would not select conservative jurists… Mr. Trump said in a statement that his shortlist was ‘representative of the kind of constitutional principles I value and, as president, I plan to use this list as a guide to nominate our next United States Supreme Court justices.’ The Trump campaign did not share how it settled on the names, but Mr. Trump has previously said that he was seeking guidance from conservative groups such as the Federalist Society and the Heritage Foundation.” (Alan Rappeport And Charlie Savage, “Donald Trump Releases List Of Possible Supreme Court Picks, The New York Times, 5/18/16)

President Trump Has Reshaped The Federal Judiciary By Appointing Conservative Judges Across All Levels Of The Judiciary. “Though an impeachment trial, a Russia investigation, an Iran crisis and other daily turmoil, President Trump has repeatedly been able to point to one consistent success that has united Republicans — moving conservative justices onto all levels of the federal judiciary. Mr. Trump’s ability to push through judges has been possible in large part because of the success that Mitch McConnell, the Senate majority leader, has had in holding open seats during the Obama administration and pushing nominees through after Mr. Trump took office.” (Matt Stevens, “Trump Has Reshaped The Judiciary. Here’s How The 2020 Democrats Would Address That,” The New York Times, 2/8/20)

President Trump Has Nominated And Had Confirmed 53 Judges To U.S. Courts Of Appeals. (“Pace Of Confirmations,” Article III Project, Accessed 10/27/20)

President Trump’s Judicial Appointments Have Flipped The Second Circuit, The Third Circuit, And Eleventh Circuit Courts. “Three circuit courts – the 2nd, based in New York; the 3rd, based in Philadelphia; and the 11th, based in Atlanta – were dominated by Democratic presidents’ nominees when Trump came into office. Now Republican presidents’ nominees are in the majority in each.” (Richard Wolf, “President Trump Has Transformed The Federal Courts, But John Roberts Still Leads Them,” USA Today, 7/1/20) 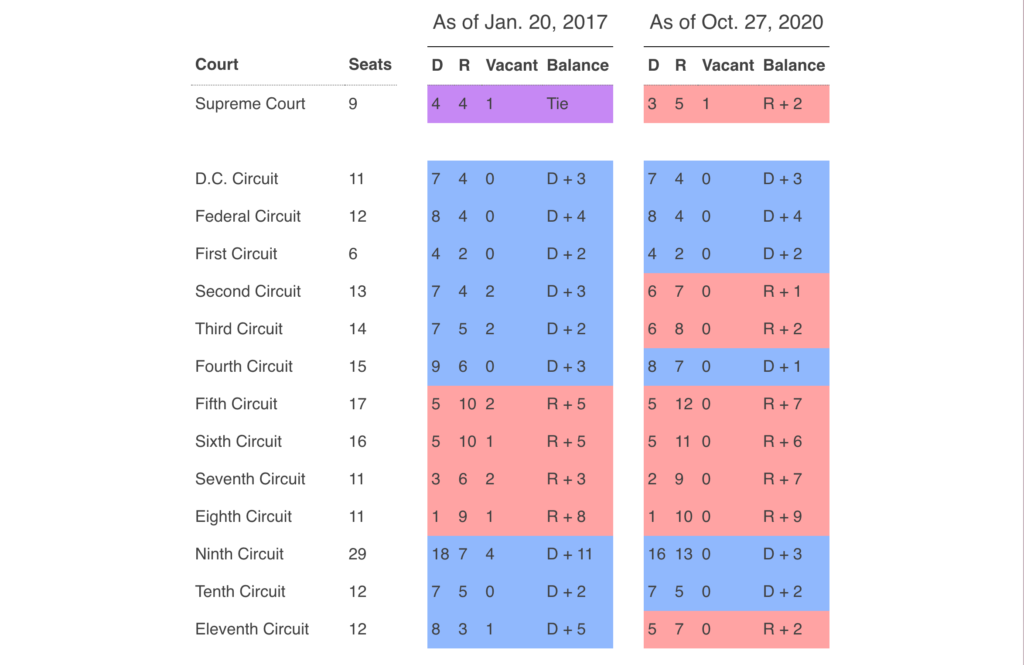