After the New York Post released multiple bombshell stories regarding Joe and Hunter Biden’s pay for play corruption in Ukraine the Biden campaign was put on the defensive.

Biden’s campaign fought back, not by denying the authenticity of the emails or the occurrence of the meeting, but by saying the meetings “was not on Biden’s official calendar.”

Well here are three other meetings that happened that also do not appear on the official calendar.

According to Politico, Vice President Biden arranged an Oval Office meeting with President Obama for his son-in-law Howard Krein’s business partners Steven Krein and Unity Stoakes in 2011. There’s a photo of it, but the meeting is not on Biden’s official schedule. 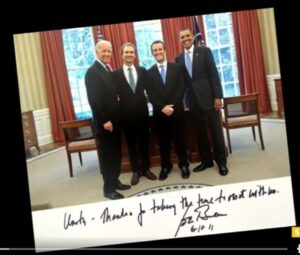 In 2013, Vice President Biden’s meeting with Jonathan Li in Beijing was also not on his “official schedule.” Hunter Biden admitted he arranged the meeting for Li, who ran a Chinese private-equity fund and was setting up a new fund with Hunter. And “ten days after the Bidens’ trip, Shanghai authorities issued the fund’s business license,” reported NBC News.

In January 2017, Vice President Biden was in a meeting with President Obama, Deputy Attorney General Sally Yates, FBI Director James Comey, and National Security Advisor Susan Rice in the Oval Office to discuss the political targeting of incoming National Security Advisor Lt. Gen. Michael Flynn. Biden lied about this meeting, but notes from the meeting show Biden used that meeting to discuss the use of the Logan Act. It was also not on his “official schedule.”

Time after time Joe Biden has proven he’s willing to lie for his own political gain, and these emails prove Joe Biden is too corrupt to be president.